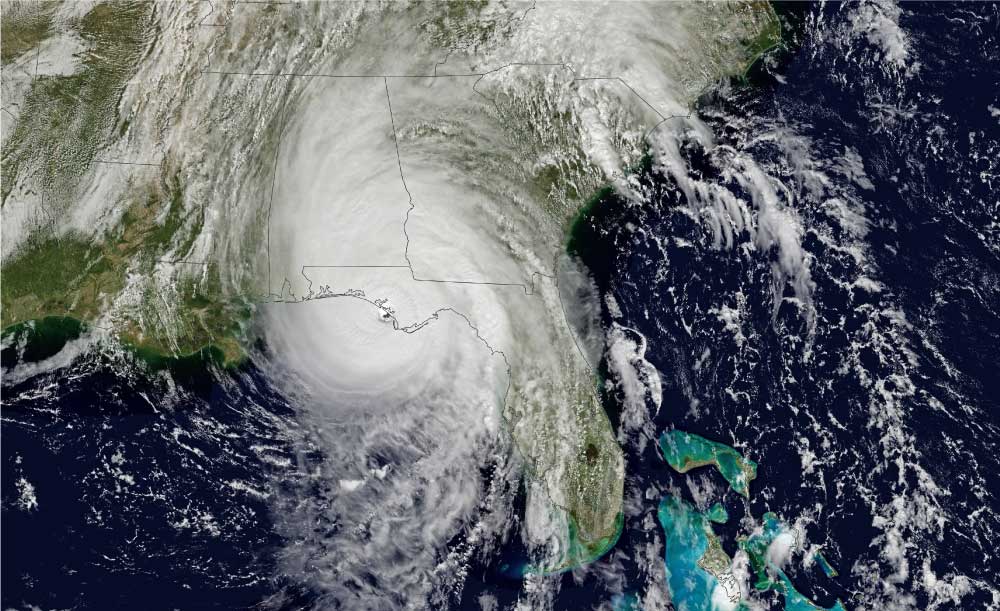 On Wednesday, October 10, the panhandle of Florida was struck by Hurricane Michael, which has already claimed over 30 lives and destroyed communities, homes and infrastructure across multiple states. Michael is the strongest hurricane in recorded history to make landfall in that region. And in coming years, it’s likely that we’ll continue to see an increase in record breaking storms — as well as record-breaking heat waves, droughts, floods, and wildfires.

Only two days before Michael unleashed its devastation on the United States, the United Nations International Panel on Climate Change (IPCC) released a dire report on the prospects for maintaining global temperature rise to 1.5°C—and why we must meet this challenge head on.

In 2015, roughly during the time that the Paris Climate Agreement was being signed, global temperatures reached 1°C above pre-industrial levels. And we’re already feeling the impacts of this increase in the form of bigger storms, bigger wildfires, higher temperatures, melting arctic ice, etc.

The recent IPCC report concludes that, if society continues on its current trajectory — and even if the world abides by the Paris Climate Agreement — the planet will hit 1.5°C of warming in a matter of decades, and possibly in the next 12 years. And every half degree more that temperatures rises is expected to bring on even more extreme effects. Even if we can limit global warming to 1.5°C, the report predicts we’ll lose most coral reefs, sea levels will rise and flood many coastal communities, more people around the world will experience extreme heat waves, and other natural disasters can be expected to increase.

As global temperatures rise, they don’t rise evenly across the globe. Land air is expected to reach higher temperatures than that over the oceans, so what could be 1.5°C on average across earth, might be a 3-4.5°C increase in some sections of the world. This has the potential to trigger deadly heat waves, wildfires and droughts, which would also negatively impact local ecosystems and farmland.

But what about if we reach 2°C? This level of temperature increase is often floated as the highest limit the world can handle without too much suffering – but how much worse will it be than 1.5°C?

A difference of 0.5°C may not seem like much, but it could mean the difference between a world with some surviving coral reefs, and a world in which they — and many other species — are all destroyed. Two degrees could lead to an extra 420 million people experiencing extreme and possibly deadly heat waves. Some regions of the world will see increases in temperatures as high as 4-6°C. Sea levels are predicted to rise an extra 10 centimeters at 2°C versus 1.5°C, which could impact an extra 10 million people along coastal areas.

Meanwhile, human health will deteriorate; diseases like malaria and dengue fever could become more prevalent and spread into new regions with this increase in temperature. Farmland for many staple crops could decrease, and even livestock are expected to be adversely affected as feed quality and water availability may decrease.

The list goes on and on. But perhaps one of the greatest threats of climate change is that those who will likely be the hardest hit by increasing temperatures are those who are already among the poorest and most vulnerable.

Yet we’re not quite out of time. As the report highlights, all of these problems arise as a result of society taking little to no action. But what if we did start taking steps to reduce global warming? What if we could get governments and corporations to recognize the need to reduce emissions and switch to clean, alternative, renewable energy sources? What if individuals made changes to their own lifestyles while also encouraging their government leaders to take action?

The report suggests that under those circumstances, if we can achieve global net-zero emissions — that is, such low levels of carbon or other pollutants are emitted that they can be absorbed by trees and soil — then we can still prevent temperatures from exceeding 1.5°C. Temperatures will still increase somewhat as a result of current emissions, but there’s still time to curtail the most severe effects.

There are other organizations that believe we can achieve global net-zero emissions as well. For example, this summer, the Exponential Climate Action Roadmap was released, which offers a roadmap to achieve the goals of the Paris Climate Agreement by 2030. Or there’s The Solutions Project, which maps out steps to quickly achieve 100% renewable energy. And Drawdown provides 80 steps we can take to reduce emissions.

We don’t have much time left, but it’s not too late. The prospects are dire if we continue on our current trajectory, but if society can recognize the urgency of the situation and come together to take action, there’s still hope of keeping the worst effects of climate change at bay.

An edited version of this article was originally published on Metro. Photo courtesy of NASA.

Genome Editing and the Future of Biowarfare: A Conversation with Dr. Piers ...