The following article was contributed by Billy Babis.

Earlier this year, Cape Town, a port city in South Africa, prepared for a full depletion of its water resources amidst the driest 3-year span on record. The threat of ”Day Zero” —  the day when the city would officially have cut off running water — has subsided for now, but the long-term threat remains. And though Cape Town’s crisis is local, it exemplifies a problem several regions across the globe may soon have to address.

In addition to being part of Cape Town’s driest 3-year span on record, 2017 was the city’s driest single year since 1933. With a population that has nearly doubled to 3.74 million in the past 25 years, water consumption has increased as the supply dwindles.

The video below (added on November 28, 2018) illustrates how one of Cape Town’s largest reservoirs, the Theewaterskloof Dam, has been affected by this three-year drought.

In January of this year, the city of Cape Town made an emergency announcement that Day Zero would land in mid-April and began enforcing restrictions and regulations. Starting on February 1st, the Cape Town government put emergency water regulations into effect, increasing the cost of water to 5-8 times its previous rate and placing a suggested 50 liter per person per day cap on water use. For context, the average American uses approximately 300-380 liters of water per day. And while Cape Town residents continue to use 80 million liters more than the city’s goal of 450 million liters per day, these regulations and increased costs have made progress. Water consumption decreased enough that Day Zero has now been postponed until 2019, as the rainy season (July-August) is expected to partially replenish the reservoirs. 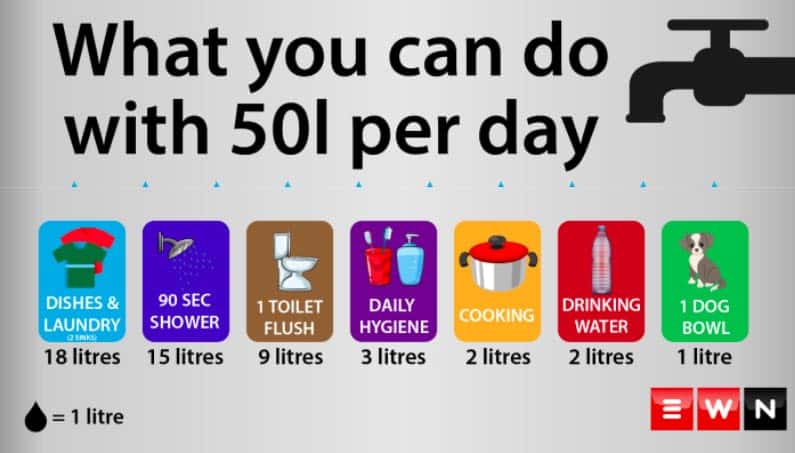 Cape Town’s water consumption decreased largely due to its increased cost. The municipality also restricted agricultural use of water, which usually makes up just under half of total consumption. These restrictions are worsening Cape Town’s already struggling agricultural sector; which in this 3-year drought has slashed 37,000 jobs and lost R14 billion (US$1.17 billion), contributing to inflated food prices that shoved 50,000 people below the poverty line.

On the innovation side, the city has made major investments in infrastructure to increase water availability: 3 desalination plants, 3 aquifer abstraction facilities, and 1 waste-water recycling project are currently underway to ultimately increase Cape Town’s water availability by almost 300 million liters per day. 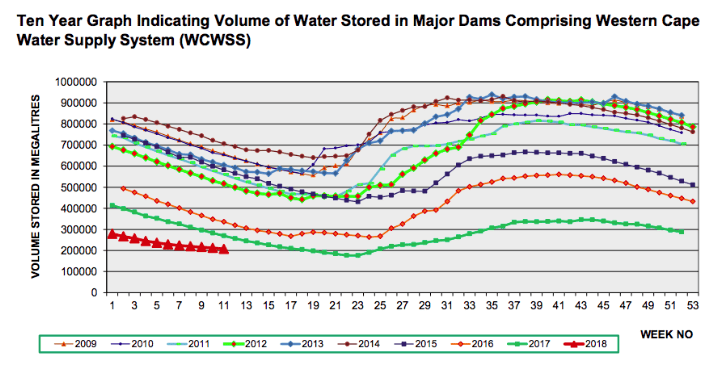 Did climate change cause the water crisis?

Severe droughts have plagued subtropical regions like Cape Town long before human-caused climate change. Thus, it’s difficult to conclude that climate change directly caused the Cape Town water crisis. However, the International Panel on Climate Change (IPCC) continues to find evidence suggesting that climate change has caused drought in certain regions and will cause longer, more frequent droughts over the next century.

Drought can either be meteorological (abnormally limited rainfall), agricultural (abnormally dry soil, excess evaporation), or hydrological (limited stream-water). While each of these problems are interrelated, they have varying impacts on drought in different regions. Meteorological drought is often the most important, and this is certainly the case in Cape Town.

Meteorological drought occurs naturally in Cape Town and the other few regions of the world with a “Mediterranean” climate: Central California, central Chile, northern Africa and southern Europe, southwestern Australia, and the greater Cape Town area have dry summers and variably rainy winters. Due to global weather oscillations like El Nino, the total rainfall in winter varies dramatically. A given winter is usually either very rainy or very dry. But as long as repeated and prolonged periods of drought don’t strike, these regions can prepare for dry seasons by storing water from previous wet seasons.

But climate change threatens to jeopardize this. With “robust evidence and high agreement,” the IPCC concluded that while tropical regions will receive more precipitation this century, subtropical dry regions (like these Mediterranean climates) will receive less. In fact, warm, rising air near the equator ultimately settles and cools in these subtropical regions, creating deserts and droughts. Therefore, increasing equatorial heat and rain (as global warming promises to do) will likely lead to drier subtropical conditions and more frequent meteorological drought.

But the IPCC also expects these Mediterranean climates to experience more frequent agricultural drought, (IPCC 5) largely due to growing human populations. In addition, renewable surface water and groundwater will decrease and hydrologic drought will likely occur more frequently, due in large part to the increasing population and resulting consumption.

What we can learn from this crisis

Earlier this year, many Capetonians feared a total catastrophe: running out of water. Wealthier citizens might have been able to pay for imported water or outbound flights, but poorer communities would have been left in a much more dire situation. International aid likely would have been necessary to avoid any fatal consequences.

The city seems to have averted that for now, but not without cost. The drought has caused immense strain on the agricultural economy that “will take years to work out of the system,” explains Beatrice Conradie, Professor of Economics and Social Sciences at University of Cape Town. “Primary producers are likely to act more conservatively as a result and this will make them less inclined to invest and create jobs. The unemployed will migrate to cities where they will put additional pressure on already strained infrastructure.”

And while Cape Town’s water infrastructure projects — desalination plants, aquifer abstraction facilities, and waste-water recycling projects — provided some immediate and prospective relief, they will not always be an option for every region. Desalination plants are very expensive and energy intensive (thus, climate change contributors), and pollute the local ocean ecosystem by releasing the brine remnants of desalination back into the water. Conradie raises further concerns about unregulated well-drilling in response to surface water restrictions. Regulated and unregulated over-abstraction from aquifers commonly leads to salt-water intrusion, permanently contaminating that fresh water and killing wetland wildlife. These are the best solutions available, and none of them are sustainable.

Just as Capetonians failed to heed the cries of their government before reaching crisis-mode, global citizens are adjusting very slowly to the climate change cries of scientists and governments around the globe. But Cape Town’s response offers some valuable sociological lessons on sustainability. One is that behavioral changes can swing abruptly on a mass scale. Once a sufficient sense of urgency struck the people of Cape Town in early February (see figure below), the conservation movement gained a critical mass. Community members exponentially fed off each others’ hope. 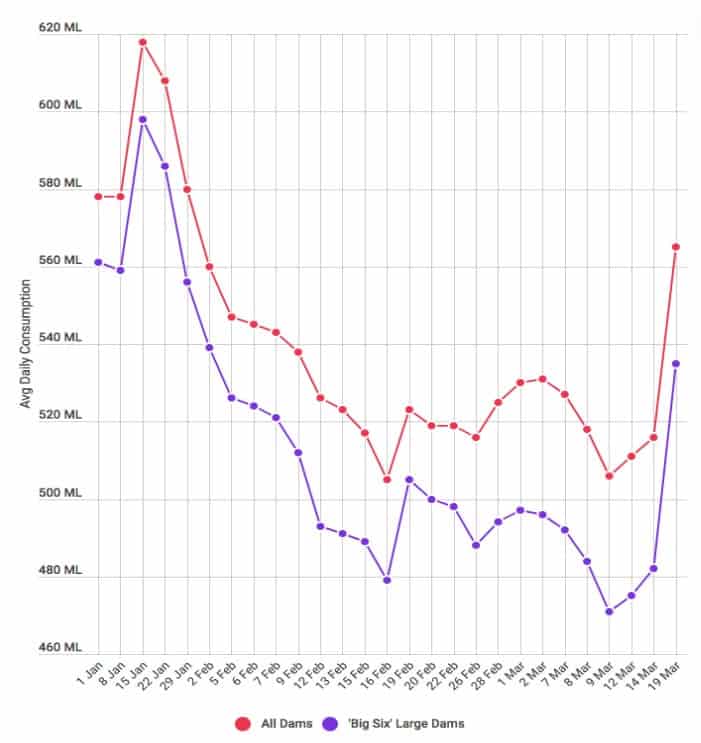 But the role of governance proved indispensable. While Cape Town had long tried to inform the public of the water shortages, residents didn’t adjust their consumption until the government made the emergency announcement on January 17th and began enforcing drastic regulations and fees.

As Cape Town’s sustainability efforts demonstrate, addressing climate change is a social problem as much as a technical problem. Regardless of technological innovations, understanding human behavioral habits will be crucial in propelling necessary changes. As such, sociologists will grow just as important as climate scientists or chemical engineers in leading change.

Cape Town’s main focus over the past few months has been discovering the best ways to make behavioral nudges to its citizens on a mass scale to reduce water consumption. This entailed research partnerships with University of Cape Town’s sociology departments and the Environmental Policy Research Unit (EPRU). The principle of reciprocity reigned true – that people are more likely to contribute to the public good if they see others doing it – and enhancing this effect on a global scale will grow increasingly important as we attempt to mitigate and adapt to environmental threats in this century.

With or without a changing climate, though, water scarcity will become an increasingly urgent issue for humanity’s growing population. Population growth continues to catapult our ecological footprint and increasingly threaten the ability of future, presumably larger, generations to flourish. Amidst their environmental challenge, the people of Cape Town demonstrated the importance of effective governance and collaboration. As more subtropical regions begin to suffer from drought and water shortages, learning from the failures and successes of Cape Town’s 2018 crisis will help avoid disaster.

When Should Machines Make Decisions? Russian