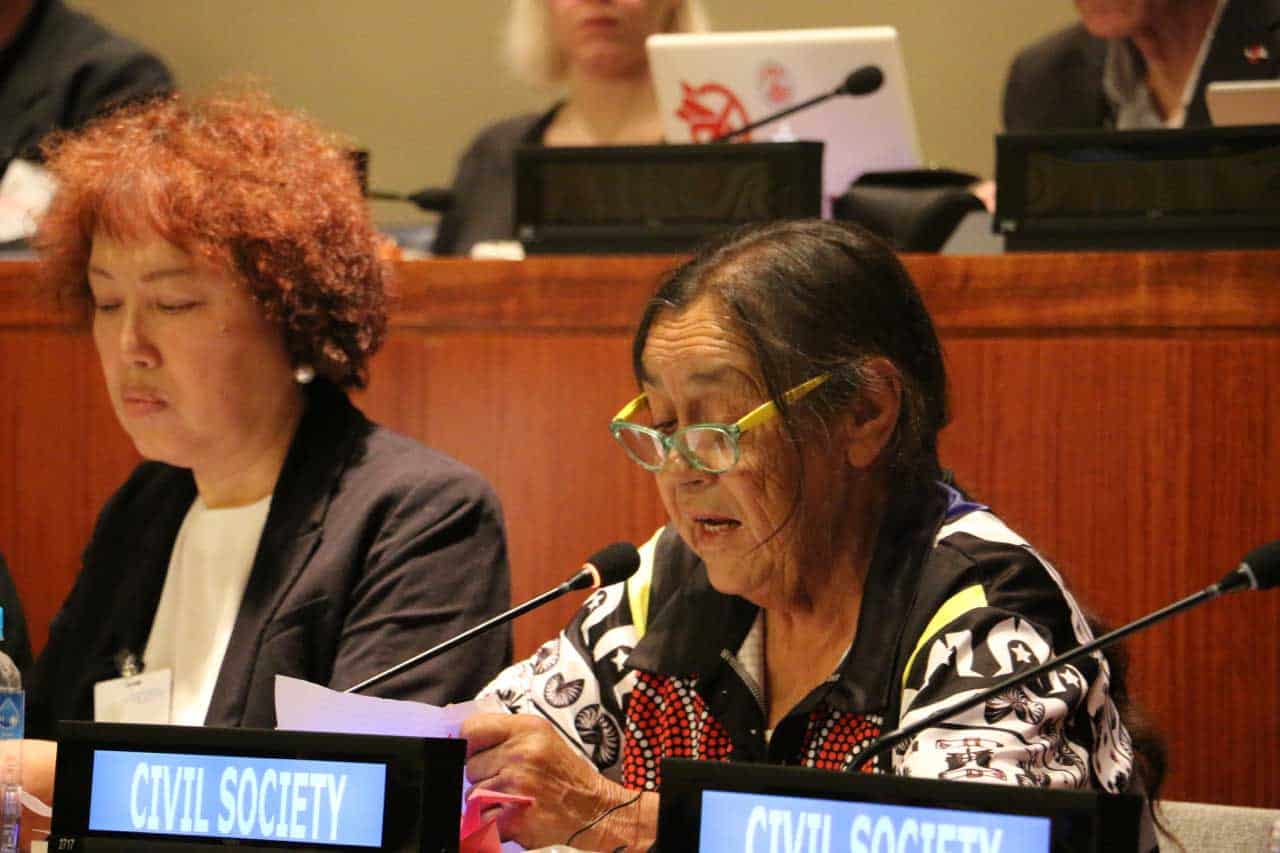 The following statement was provided by Sue Coleman-Haseldine, a survivor of nuclear bomb tests near her home in Australia. She also present testimony at the UN negotiations on Tuesday, March 28.

My name is Sue Coleman-Haseldine I am Kokatha elder. I was born on Koonibba Aboriginal Mission in 1951 which is about 40 km west of Ceduna in South Australia. I now live just out of Ceduna with my husband. For those that don’t know we are on the edge of the Nullabor where the desert meets the sea. Our country takes in one of the last stunted mallee regions that is still in pristine condition. We still carry on looking after our country as our people did even though we don’t live out there now. I remember the good life of hunting for wild game and collecting bush fruits. Life was healthy.  We still do all this today. I teach the young ones coming up about the land and all the life it gives.

I am a mother, grandmother and great grandmother. My third great grandson was born just recently. And now I am here, speaking about the past, present day problems and what we want for the future. I’m fighting for all my grandchildren and all the children of the world. To keep the dream alive of a clean, safe future where there is no nuclear fear hanging over our heads. And like I tell the children, I’m fighting for the animals too. We are all connected. A world without animals wouldn’t be a world at all.

I was two years old when the first Atomic Bomb tests began in the desert areas north west of my mallee country in 1953.

A full scale atomic bomb went off on October 15 at Emu Fields. This first one was Totem 1 and it caused a death cloud known by many as the ‘Black mist’. It killed people, blinded others and made people very sick. Its effects are still being felt today. I wasn’t on ground zero but the black mist went all over. And who knows where the radiation went from the many the tests that followed. I remember older people talking about Nullabor dust storms. It was the fallout from the Maralinga tests. The dust didn’t stay in one place.

Our district is full of cancer now. My 86 year old Aunty once told me “that minga – that cancer sickness was never here before those bombs”.

Cancer is the big one but it is also common for people to suffer from thyroid conditions or stomach and bowel problems. This is the case for myself and some of my grandchildren. Fertility problems, still births, birth defects became more common at the time of the testing. Woomera cemetery is full of babies who started dying around this time. We still wonder and worry that women have trouble because of the ongoing radiation in the area or genetic changes passed down through generations.

Like all people, the giving of life and raising children is so important to us and it’s our human rights to be able to continue raising our family and sharing our culture forever. There are lots of Aboriginal groups in Australia. We are all different. But for all of us our land is the basis of our culture – it’s our church, our grocery shop, our schools, our chemist. But living a life and practising culture out in the desert wasn’t recognised as worthy by governments back then or still today. In fact we still have to work hard to have all the life, all the plants, all the animals, the underground water out in the desert recognised and protected.

This is one reason why Emu Fields and then Maralinga were picked for testing. The English and Australian governments didn’t think that land was valuable – they called it a wasteland. But Aboriginal people were still looking after and living their culture on the land that supported them. Aboriginal people were still present in the testing area when the bombs went off. The government was no good at ensuring everyone was safe. They had one patrol officer and some signs in English that people couldn’t read.

Australia was even more racist then. People have to remember this was before Aboriginal people had the right to vote. I believe the government really didn’t care what happened to Aboriginal people or their land. The bomb tests continued for many years right until 1967. Big atomic tests that the British and Australian governments were proud of and then a whole lot of secret tests that the British did with plutonium. These tests contaminated a huge area and everything in it but people 100 km away were also impacted. This includes my family and the broader community where I live.

It is good more people are learning about the bombs in Australia. And I want more people to think about ongoing impacts. Especially in my region because it doesn’t matter if you’re black, white or mixed everyone has a sad story about premature sickness and death in their families.

I grew up hearing about the bombs but I didn’t know about how the sickness went through the generations. When mining companies started eyeing off areas of my country I started to look more into it and I went to an Australian Nuclear Free Alliance meeting to learn more about fighting mining companies but also radiation fallout. What I learnt devastated me. To find out that our bush foods were possibly contaminated was a real blow to me.

It was at these meetings I also learnt about other nuclear bombs. About other places where tests happened and also more about Japan during the war. I also learnt that uranium mined in Australia was used in these weapons of destruction.

To know that uranium from our country was devastating other countries and people broke my heart. I decided to fight any kind of mining then. There are too many illnesses and cancer deaths in our Country. What’s changed to cause this? I believe it is caused from radiation contamination, but I can’t prove it. I think any kind of mining in our area would be digging up contaminated earth and sending it back to us on the north-north-west winds.

Having whole displaced communities has also created confusion and conflict for other Aboriginal groups. These are ongoing issues which cause stress and heartbreak.

We have been poisoned and we don’t need the threat of being poisoned again by a nuclear waste dump — whether it’s Australia’s waste or waste from around the world. We don’t need this stress hanging over our heads. It’s not our right to condemn our children to the risk of leakages or damage or terrorist attacks for ever. This is condemning them to a life of fear. It’s about time people see the desert and arid regions as places full of life instead of wastelands for dangerous activities. Aboriginal people have worked really hard to have their culture and their land understood. We don’t need governments telling us we don’t understand or are too emotional about these things. We do understand the risks and we don’t want them.

But more than that people all over the world don’t want all these problems. The uranium should stay in the ground. We need to stop making waste. And it’s not just the physical impacts of the nuclear industry I worry about. To have a nuclear waste dump back on the cards has already caused a lot of anxiety in our region. Aboriginal people in particular have a lot of issues to deal with. There is still a lot of poverty issues with education and job opportunities, self-medicating through drugs and alcohol.  We are still being made refugees in our own country because if the government of the mining companies want something they take it which also causes a lot of anxiety and mental problems.  I worry there is no security for the future.  It’s a different kind of black mist hanging over us now.  The original blast brought a black mist and nobody knew what it was.  Now people are a lot wiser but we still can’t see through to the future.  There is no guarantee that any nuclear facility – whether a mine a reactor or a waste dump will be properly looked after.

It’s been good to talk to you today and I appreciate your attention. And I want you to know I don’t want people today to shoulder the blame of the past and to feel responsible for all the wrongs that have happened. I am talking to you now because I think we need to join forces and make a better future for future generations, all over the world.

I want to thank Bill Williams for everything he taught me over the years; lessons never to be forgotten.  The fight goes on.

Lastly I just want to thank the organisers.  I am standing out front here today but lots of people are behind the scenes. And I thank them with all my heart.

Remember: the future forever belongs to the next generation.