North Korea claims that, on January 6, they successfully tested their first hydrogen bomb. Seismic analysis indicates that they did, in fact, test what was likely a nuclear bomb, but experts – and now the White House — dispute whether it was a real hydrogen bomb.

David Wright, Co-director of the Global Security Program for the Union of Concerned Scientists, said, “They [N. Korea] are claiming that it was a hydrogen test, and as far as I can tell, nobody believes it was a real, two-stage hydrogen bomb, which is the staple of the US and Russian and Chinese arsenals.”

This is the fourth nuclear test North Korea has conducted since 2006. The first three are suspected to have been atomic bombs, more similar to those used on Japan during World War II. The power from an atomic bomb comes from the uranium or plutonium molecules splitting apart in a process known as fission, and the result for a first-generation bomb is a yield that’s on the order of about 10-20 kilotons. This is consistent with the estimated yields of the first three nuclear tests North Korea conducted. 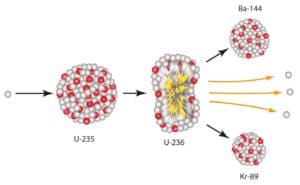 “It appears from the numbers I’ve seen that the yield is very similar to what their recent yields were, maybe 5-10 kilotons, which, if that number holds up, is probably too small to be a true hydrogen bomb,” Wright explained.

But Wright also pointed out that the North might simply be using the term, hydrogen bomb, somewhat differently than we do in the west. If tritium, which is a radioactive isotope of hydrogen, is placed in the core of a standard uranium or plutonium atomic bomb, then when the bomb goes off, it will compress and ignite the tritium. In this case, the tritium fusion will emit a pulse of neutrons that will each trigger a fission reaction in the surrounding material, ensuring a more efficient use of the fissile explosives.

“It’s not what people typically mean by a hydrogen bomb,” Wright said, “but it does use some amount of fusion as a way of making the fission more effective. So that may have been what they did.”

However, as experts work to determine just what type of bomb the North tested, Wright argues there’s a more important fact to consider: It’s still a nuclear bomb. Whether it’s a fission bomb or a fusion bomb, he says, “It doesn’t really matter that much, to the extent that you’re still talking about nuclear weapons. If you develop a way to deliver them to a city, you’re talking catastrophe.”

“Why is North Korea’s ‘hydrogen bomb’ test such a big deal?,” by the Washington Post.

Why MIRI Matters, and Other MIRI News

The Wisdom Race Is Heating Up
Scroll to top
Thanks for subscribing!