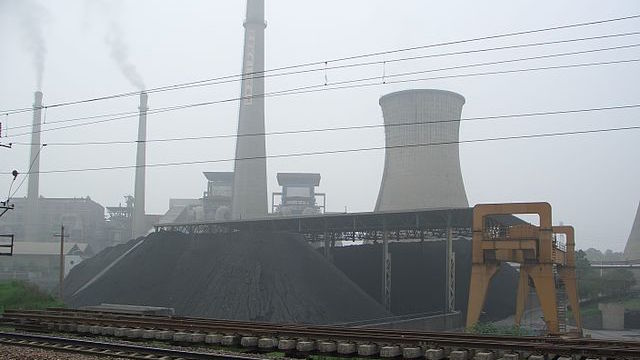 Chinese power plant image courtesy of Tobias Brox under a Creative Commons Attribution-ShareAlike 3.0 Unported license (the image has been cropped)

Turkish F-16s shot down a Russian Su-24 fighter-bomber near the border between Turkey and Syria. Some reports indicate that the Russian plane’s pilots were shot and possibly killed as they parachuted from their damaged plane. It was the first time a NATO member shot down a Russian military plane since the end of the Cold War. Turkey claimed the Russian plane violated its airspace for five minutes and was shot down only after ignoring ten warnings. Russia said that its plane never entered Turkish airspace. The US military confirmed Turkey’s claim that the Russian plane did receive ten warnings without apparently responding. But Der Spiegel said that both analysis of the flight path of the plane provided by the Turkish military and NATO sources indicate the plane was inside Turkish airspace for only a few seconds. Turkey had already accused Russian planes of violating its airspace on a number of different occasions. Russia formally apologized to Turkey in October when another Russian plane crossed into Turkish airspace. Turkey has also complained about Russian attacks on Syrian villages inhabited by Turkmen, an ethnic group with cultural connections with Turkey. Russian President Vladimir Putin called the incident a “stab in the back”. US President Barack Obama said Turkey had the right to defend itself but called for all sides to de-escalate the situation. Turkey called for an emergency NATO meeting to discuss the incident. Max Fisher noted in Vox that an incident between NATO and Russian forces near the Syrian border like this probably would not escalate, because neither side is likely to mistake it as the beginning of a real attack; if a Russian plane were shot down in the Baltics it would probably be much more dangerous.

Russia launched a military satellite thought be the first part of a new system designed to provide early warning of ballistic missile launches. Russia’s last early-warning satellite failed in 2014. President Putin announced earlier in the month that Russia planned to deploy weapons that are “capable of penetrating any missile defenses”. Russia has objected to the US missile defense system, which Russia says is intended to render Russia’s nuclear deterrent ineffective. The US says that its missile defenses are designed to protect against limited attacks from countries like Iran and North Korea and could not protect the US or its allies against a Russian strike. At a meeting on the state of the Russian defense industry, Russian cameras captured what appeared to be a page in a briefing book outlining the development of underwater drone called “Status-6” designed to deliver a nuclear weapon to port cities. The system would ostensibly be intended to maximize nuclear fallout in order to inflict “unacceptable damage to a country’s territory by creating areas of wide radioactive contamination that would be unsuitable for military, economic, or other activity for long periods of time”. Steven Pifer argued that Russia deliberately leaked the weapon design for domestic political purposes, but that it would actually be of limited strategic value and might not be something Russia actually intends to build.

According to revised official data, China has been underestimating its coal use since 2000. The new data show that China has been emitting as much as 17% more greenhouse gases from coal than was previously disclosed. China was already the largest emitter of greenhouse gases before the revision. China’s emissions were revised upward by an amount equivalent to the emissions of the entire German economy. The new data will not change scientists’ estimates of the amount of carbon dioxide in the atmosphere, which is measured directly. But it may force scientists to revise their estimate of how much carbon is being absorbed by “carbon sinks” like forests and oceans. “We have known for some time that China was underreporting coal consumption,” the Sierra Club’s Nicole Ghio told ThinkProgress. “The fact that the Chinese government is now revising the numbers to more accurately reflect the real consumption is a good thing.”

A new World Bank report found that climate change could cause more than 100 million people to fall into poverty by 2030 by increasing the spread of diseases and interfering with agriculture. The report cited studies showing that climate change could cause crop yields to fall by 5% and increase the number of people at risk for malaria by 150 million by 2030. The report calls for proactive climate adaptation measures, like building dikes and drainage systems to manage flooding and the cultivation of climate-resistant crops and livestock. But the report said that ultimately only efforts to reduce global emissions will protect the world’s poor from the impact of climate change.

Three new cases of Ebola were confirmed in a suburb of Monrovia, more than a month after Liberia was declared free of the disease for the second time. Investigators have not determined how the index patient, a 15-year-old boy, contracted the disease. The fact that the boy’s mother tested positive for high levels of Ebola antibodies raises the possibility that the disease could be spreading through undocumented or mildly symptomatic cases. Studies show that the virus can remain in bodily fluids for as many as nine months in survivors. World Health Organization (WHO) Special Representative for the Ebola Response Bruce Aylward said that flare-ups of Ebola after countries have been declared free of the disease should be treated as rare but inevitable. Dan Kelly, a doctor who advises Partners in Health in Sierra Leone, said that “if we have learned anything in this epidemic, it’s that 42 days is not adequate to declare the end of human-to-human transmission.”

An independent panel of researchers at Harvard and the London School of Hygiene & Tropical Medicine looking into the response to the Ebola outbreak called for independent oversight of WHO. In September, an AP investigation found that senior WHO officials were reluctant to declare Ebola a health emergency for political and economic reasons. The panel’s report called for the creation of a dedicated outbreak response center and a “politically protected” committee with the authority to declare public health emergencies. Suerie Moon, a public health researcher at Harvard who worked on the report, said that “The WHO is too important to fail”.

Researchers created a hybrid version of a bat coronavirus related to the virus that causes severe acute respiratory syndrome (SARS) that is capable of infecting human airway cells. The virus is not the first bat coronavirus known to be capable of binding to key receptors on human airway cells, but the results suggest that bat coronaviruses may be more of a danger to humans than previously believed. In 2014, the US asked researchers to suspend “gain-of-function” research making certain viruses more deadly or transmissible while the National Science Advisory Board for Biosecurity and the National Research Council assess the risks. The bat coronavirus research had already started and was allowed to continue when the moratorium was called. Critics of gain-of-function research worry that what we learn from it does not justify the risk of creating dangerous new viruses. Rutgers molecular biologist Richard Ebright told Nature that in his opinion “the only impact of this work is the creation, in a lab, of a new, non-natural risk”.

A study in The Journal of Volcanology and Geothermal Research finds that supervolcanoes may erupt only when they are triggered by something external like an earthquake or faults in the structure of the surrounding rock. Another recent paper in Science argued that the increase in volcanic activity in the Deccan Traps that may have contributed to the Cretaceous-Paleogene extinction event 65 million years ago could have been triggered by the asteroid or comet that hit the Earth around that time. The Journal of Volcanology and Geothermal Research paper goes against the prevailing theory that supervolcanoes erupt when the internal pressure within a magma chamber builds to the point that it causes an explosion. But the study’s model suggests that the buoyancy of the magma may not actually put much pressure on the magma chamber. Lead author Patricia Gregg said there is also not much evidence of pressure build up at supervolcano sites. “If we want to monitor supervolcanoes to determine if one is progressing toward eruption, we need better understanding of what triggers a supereruption,” Gregg said. “It’s very likely that supereruptions must be triggered by an external mechanism and not an internal mechanism, which makes them very different from the typical, smaller volcanoes that we monitor.”

A Nature Communications paper argued that the Earth was hit by massive solar storms at least twice in the first millennium A.D. Scientists suspect that the spike in the concentration of carbon-14 in the atmosphere around the years 774 and 993 was due to some kind of surge of extraterrestrial radiation. The recent paper argues that new measurements of the concentration of isotopes of beryllium and chlorine from Arctic and Antarctic ice cores indicate that the radiation that hit the Earth was from solar storms at least five times larger than any solar storm scientists have measured. These storms would have to have been even stronger the 1859 “Carrington Event” which interfered with telegraph systems and created auroras over large parts of the planet, but did not notably increase the concentration of carbon-14 in the atmosphere. A solar storm of that large could blow out transformers and damage electrical systems around the world.

This news summary was put together in collaboration with Anthropocene. Thanks to Tony Barrett, Seth Baum, Kaitlin Butler, and Grant Wilson for help compiling the news.