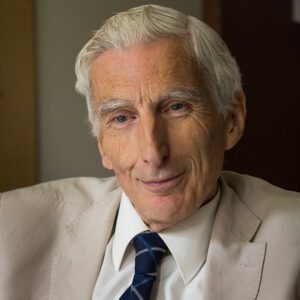 Astronomer Royal, Co-founder of the Centre for the Study of Existential Risk

Martin Rees, Baron Rees of Ludlow and Astronomer Royal, is Emeritus Professor of Cosmology and Astrophysics at the University of Cambridge. He is the author or co-author of more than 500 research papers, mainly on astrophysics and cosmology, as well as eight books (six for general readership), and numerous magazine and newspaper articles on scientific and general subjects. In 2005 he was appointed to the House of Lords, and he has been Master of Trinity College as well as President of many organizations, including the Royal Society, the Royal Astronomical Society and the British Association for the Advancement of Science. His many awards include the Gold Medal of the Royal Astronomical Society, the Balzan International Prize, the Cosmology Prize of the Peter Gruber Foundation, the Einstein Award of the World Cultural Council and the Crafoord Prize (Royal Swedish Academy).