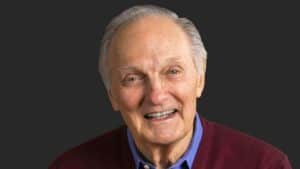 Alan Alda has earned international recognition as an actor, writer and director. He has the distinction of being nominated for an Oscar, a Tony, and an EMMY – and publishing a bestselling book – all in the same year (2005). For over 20 years he has worked to help broaden the public’s understanding of science. He helped found the Alan Alda Center for Communicating Science at Stony Brook University where he is a Visiting Professor. He originated The Flame Challenge, a yearly international competition for scientists in which they compete to explain complex scientific concepts so that 11-year-olds can understand them. Since 2008, he has worked with physicist Brian Greene in presenting the annual World Science Festival in New York City, attended since its inception by over a million people. He has also hosted award winning science series like Scientific American Frontiers, The Human Spark, Brains on Trial on PBS, interviewing leading scientists from around the world.