The following post was written by Jung Hyun Claire Park.

One in nine people around the world do not have access to clean water.  As the global population increases and climate heats up, experts fear water shortages will increase. To address this anticipated crisis, scientists are turning to a natural reserve of fresh water that has yet to be exploited: the atmosphere.

The atmosphere is estimated to contain 13 trillion liters of water vapor and droplets, which could significantly contribute to resolving the water shortage problem. However, a number of attempts have already been made to collect water from air. Previously, researchers have used porous materials such as zeolites, silica gel, and clay to capture water molecules, but these approaches suffered from several limitations. First, the aforementioned materials work efficiently only in high-humidity condition. Yet it’s low-humidity areas, like sub-Saharan Africa, which are in greatest need of clean drinking water. Another limitation is that these materials tend to cling too tightly to the water molecules they collect. Thus, these previous methods of collecting water from air have required high energy consumption to release the absorbed water, diminishing their viability as a solution to the water shortage crisis.

Now, Dr. Omar Yaghi and a team of scientists at Massachusetts Institute of Technology and the University of California Berkeley have developed a new technology that provides a solution to these limitations. The technology uses a material called a metal-organic framework (MOF) that effectively captures water molecules at low-humidity levels. And the only energy necessary to release drinkable water from the MOFs can be harnessed from ambient sunlight.

MOFs belong to a family of porous compounds whose sponge-like configuration is ideal for trapping molecules. The MOFs can be easily modified at the molecular level to meet various needs, and they are highly customizable. Researchers can modify the type of molecule that’s absorbed, the optimal humidity level for maximum absorption, and the energy required to release trapped molecules — thus yielding a plethora of potential MOF variations. The proposed water harvesting technology uses a hydrophilic variation of MOFs called microcrystalline powder MOF-801. This variation is engineered to more efficiently harvest water from an atmosphere in which the relative humidity level as low as 20% — the typical level found in the world’s driest regions. Furthermore, the MOF-801 only requires energy from ambient sunlight to relinquish its collected water, which means the energy necessary for this technology is abundant in precisely those desert areas with the most severely limited supply of fresh water.  MOF-801 overcomes most, if not all, of the limitations found in the materials that were previously proposed for harvesting water from air. 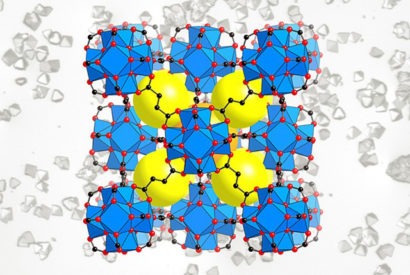 A Schematic of a metal-organic framework (MOF). The yellow balls represent the porous space where molecules are captured. The lines are organic linkers, and the blue intersections are metal ions. UC Berkeley, Berkeley Lab image

The prototype is shaped like a rectangular prism and it operates through a simple mechanism. To collect water from the atmosphere, MOF is pressed into a thin sheet of copper metal and placed under the solar absorber located on top of the prism. The condenser plate is placed at the bottom and is kept at room temperature. Once the top layer absorbs solar heat, water is released from the MOF and collected in the cooler bottom layer due to concentration and temperature difference. Tests showed that one kilogram (about 2 pounds) of MOF can collect about 2.8L of water per day. Yaghi notes that since the technology collects distilled water, all that’s needed is the addition of mineral ions. He suggests that one kilogram of MOF will be able to produce enough drinkable water per day for a person living in some of the driest regions on earth. 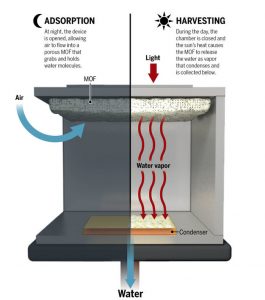 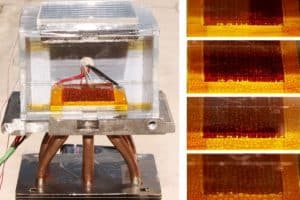 Image of a water harvesting prototype with MOF-801 with outer dimension of 7cm by 7cm x 4.5cm. MIT.

Why This Technology Is Promising

The promise of this technology mostly lies in its sustainability. Water can be pulled from the air without any energy input beyond that which can be collected from the ambient sunlight. In addition, MOF-801 is a zirconium-based compound that is widely available for a low cost. And the technology has a long-life span: Yaghi predicts that the MOF will last through at least 100,000 cycles of water absorption and desorption, and thus it does not require frequent replacement. Plus, the water harvesting technology employing MOF isn’t limited to drinking water. It could be used for any service requiring water, such as agriculture. Yaghi believes that this water harvesting technology could pose a viable solution for water shortage problems in various regions of the world.

Yaghi also anticipates that the material itself could be used for the separation, storage, and catalysis of molecules other than water as well. For instance, MOF can be tailored to capture carbon emissions before those emissions reach the atmosphere. Or they may be designed to remove existing CO2 from the atmosphere. MOF, as the name suggests, is simply a framework, and thus it has opened up many opportunities for modification to suit practical needs.

The team of researchers from Berkeley and MIT are currently pushing to test the water harvesting technology in real-life settings in regions with low humidity levels. Yaghi remarked that his ultimate goal would be to “have drinking water widely available, especially in areas that lack clean water.” He envisions providing water to villages that are “off-grid,” where each household will have a machine and create their own “personalized water.” And he hopes his envisioned future may not be too far away.

How Do We Align Artificial Intelligence with Human Values? Japanese