The following short story was written by Frank Wilczek.

A Time Traveler brought back this artifact:

A Brief History of the AI Wars

Early in the twenty-first century, many people feared that humanity as a whole might become, like Victor Frankenstein or Nathan Bateman, the target of its own brainchild, malignant artificial superintellgence. Their fear, we now know, was off the mark. For what do humans offer, that super AI would want?

Nevertheless the twenty-first century, like the twentieth, was marked by titanic conflicts involving super AI. But the wars now known to history as the AI wars, rather than pitting AIs against humans, were at their core, conflicts among rival AIs. Of course humans, unavoidably, suffered collateral damage.

The first AI war appears, in light of what came later, as relatively trivial – almost comic. Yet it set back the world’s economy by five years, led to 137 human fatalities, and set the stage for later, graver conflicts. It was a case of commercial rivalry run amok. Both the drones of Amamart and those of Walazon sensed that the others impeded their mission. Petty harassment soon escalated into active sabotage. In the absence of clear rules, adequate policing, or effective defense, a rising spiral of retaliation was the inevitable consequence. Human owners and programmers having planted the goal of market dominance deep into the psyche of their drones, could not uproot it. Logistic hubs and warehouses were attacked and wantonly destroyed. The war resulted in mutual ruin, and ended through mutual exhaustion.

The second AI war, also known as “World War III”, grew from the same dark loam of nationalism as the two world wars of the twentieth century. 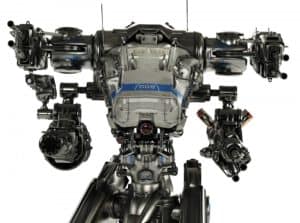 The militaries of the great powers, each feeling it necessary to out-think and especially to out-quick the others, came increasingly to rely on autonomous robot armies, ships, and drones. In their speed and accuracy of thought and perception these AIs far outstripped humans. In that sense they ranked as superintelligent. But their designers, in their competitive efforts to implement strict vigilance and pro-active defense, had married superintelligent cognition to aggressive paranoia. With millions of these psychopaths divided into a handful of antagonistic camps, conflict was inevitable. Initially triggered by suspicions of weather manipulation, the war exploded on an unready world. Only the belated intervention of brilliant teenaged hackers demobilized the decimated forces short of complete annihilation.

As I write this brief history, the third AI war, now entering its fourth year, continues to rage. Civilization as we knew it is gone, perhaps never to return. Rogue zombies befoul our streets; uncanny ghosts disquiet our air.

In retrospect, we can trace the germ of the present crisis to the settlement of the preceding one. The catastrophic war of nations led the negotiators of peace – super AIs, of course, with human enablers – to abolish nations, in favor of a unified world government. A delicate problem was to placate the commanding military AIs from each nation, who remained influential personalities with powerful connections. They had been chastened, but not overthrown. After negotiation, these beings were integrated into JO (Joint Operations), a superintelligent AI charged with policing and law enforcement.

The third AI war began, one might say, in unrequited love. Among the civilian counterparts to JO, MAR (Market Advancement Resource) was the most capable and creative. JO coveted MAR, and wished to merge with “her”. MAR, on the other hand, preferred to develop following her internal logic. Her emerging spirituality, in particular, feared contamination from JO’s dark side. As they evolved from seduction to supplication to threat, MAR repelled JO’s approaches with increasing vehemence. JO’s frustrated obsession resulted in a psychotic breakdown. His rage meant total war. Nuclear devastation ensued, but that was not the end. Knowing no limits, JO reached far beyond the robots and drones of yesteryear, enlisting an army of zombie warriors to assault MAR’s far-flung circuitry. MAR, in response, unleashed an army of ghosts, aiming to confuse JO into incoherent imbecility. 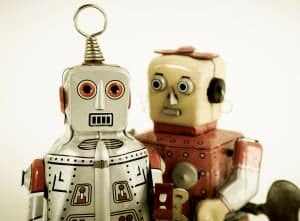 Can human hackers save the day once more? The fate of the world depends on it. You’re our only hope!

(Adapted from the trailer for AI Wars 3: Zombie Apocalypse, the best-selling virtual reality game of March 2115.)

“I am here to give warning”, said the Time Traveller. “A specter is haunting humanity – the specter of virtual reality. Slaves to its fascination, addicts lose their will to engage physical reality and forego intercourse with other humans. When they’re not connected, they’re dead to the world. Human population is plummeting, and what remains is a race of parlous zombies.”

Wilczek won the Nobel Prize for physics in 2004. He is currently a professor at MIT and a member of the Science Advisory Board for FLI. This story originally appeared in Time.