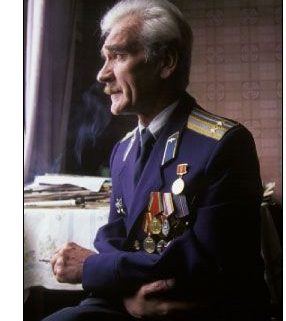 “On September 26th, 1983, Lieutenant Colonel Stanislav Yevgrafovich Petrov was the officer on duty when the warning system reported a US missile launch. Petrov kept calm, suspecting a computer error.

Then the system reported another US missile launch.

What had actually happened, investigators later determined, was sunlight on high-altitude clouds aligning with the satellite view on a US missile base.

[…] The policy of the Soviet Union called for launch on warning. The Soviet Union’s land radar could not detect missiles over the horizon, and waiting for positive identification would limit the response time to minutes. Petrov’s report would be relayed to his military superiors, who would decide whether to start a nuclear war.

Petrov decided that, all else being equal, he would prefer not to destroy the world. He sent messages declaring the launch detection a false alarm, based solely on his personal belief that the US did not seem likely to start an attack using only five missiles.”

MIRI News: September 2015
Scroll to top
Thanks for subscribing!