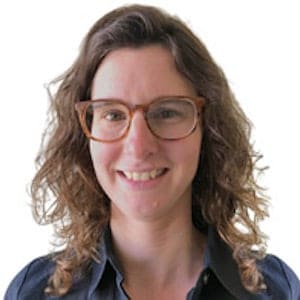 How did you get started in this field? As an undergraduate I became fascinated by the field of paleoclimate–reconstructing the history of Earth’s climate using clues left behind in geologic records. I got my PhD in paleoclimate right around the time Al Gore’s first movie, “An Inconvenient Truth” came out, and I felt a sense of urgency about our current climate crisis. Researching what Earth’s climate was like 20,000 years ago, while fascinating, didn’t have the immediate connection to what was happening in the world around me, so I shifted my work out of academia and into the present day in hopes that I could play some role–however small–in trying to minimize the impacts of climate change.

What do you like about your work? Climate change is at this incredible nexus of science, culture, policy, and the environment. To do this job well, one has to bring to the table a love of the environment, a willingness to identify and fight for the policies needed to protect it, a sensitivity to the diverse range of decisions people make in their daily lives, and a fascination with the nitty-gritty bits of the science. I love that some days my mind is challenged by a chunk of code I’m struggling with to get my data analyses right and other days I’m wrestling with nuanced word choices for a presentation to an audience that could include people skeptical about climate change. I also have the privilege of working with an incredible team of scientists, communicators, designers, and policy folks, all of whom have the shared goal of making headway on climate action.

What do you not like about your work? There are days–sometimes long stretches of time–when the lack of climate action, particularly on the part of the U.S., over the past 30 years is utterly depressing. I have been studying and researching climate issues from one angle or another for over 20 years. Over those two decades, the scientific progress has been astounding. We understand the climate problem in excruciating and ever-clearer detail. Every major climate assessment that comes out paints the problem in more urgent tones than the last. Despite all of that, our politics in the U.S. are locked in a 1990s-esque “Are humans really causing climate change?” debate that precludes us from taking the actions we so desperately need to take.

Do you have any advice for women who want to enter this field? Everyone I know in this field comes at it with passion and a desire to make change. Because of that, it’s a very inspiring field to work in. For anyone entering the field, I’d suggest sharpening your analytical and critical thinking skills while also developing strong communications skills.

What makes you hopeful for the future? We have put people on the moon. We have built an enormous network of roads to get us from coast to coast and to every small town in between. And while we still have much progress to make on ensuring that every person is entitled to and receives the same rights, our culture is shifting such that people whose skin, whose gender, or whose sexual orientation is different from that of those in power are recognized as equally deserving of those basic civil rights. We are capable of so much — technologically and culturally — and history shows that when we raise our collective voices and roll up our sleeves, we can make progress. That progress will be slow and, at times, painfully hard-won. But when I look around me at the thousands and thousands of people tackling the issue of climate change from every angle, I know I’m part of a community that will never give up.

Carina Prunkl
Scroll to top
This website uses both functional and non-functional cookies. For the placement and reading of non-functional cookies, we require your prior consent. You can change the use of cookies later and adjust your preferences. I agreeI do not agreeRead more
Thanks for subscribing!
We are in the process of redesigning the Future of Life Institute website. Changes coming soon...
x
We promise not to spam you. You can unsubscribe at any time.
Invalid email address
Thanks for subscribing!